It’s an awesome idea for two brothers that tease each other. They are showing of and tricking the other one to do stupid things that they both know they can’t do. They both end up with plaster and are hurting. So the moral here is that even know everyone else do, it’s not sure you should do it. 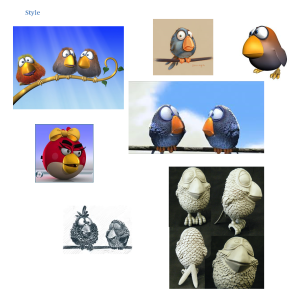 Two brothers were sitting one a windowsill, the big brother bumping his little brother in the shoulder while making a huge smile and saying: BB: Piiippp pip pipp pipp (Hey look what I can do!) Than the big brother jumps of the windowsill with the speed of gravity, he is heading to the ground. Ten centimetres from the ground he opens his wings and with an elegant twist he fly’s back up to the sky. When he gets back to his brother his brother does the same thing, jumps of the windowsill. When he gets to the ground he opens his wings, but it’s too late, he goes in the ground with a BANG. His brother fly’s down and start laughing of him.

The brothers are sitting in a tree looking down at the cars driving by. The little brother makes some funny noises and reminds the brother of the stupid jump earlier. The brother laugh hard, than the little brother make it clear only he can manage another trick. He jumps of the branch, fly’s in front of the car, spins under it and fly’s back up behind the car before he fly’s up to his brother satisfied. His brother rolls his eyes before he to jumps of the branch, under the car and up behind it. When he flies up he didn’t see that the car had a hanger behind it. His brother crashes in the hanger with a bang. The kid brother sits I the tree laughing.

They drag up a white flag on the pole together. After that they hug and agree to be friends instead.